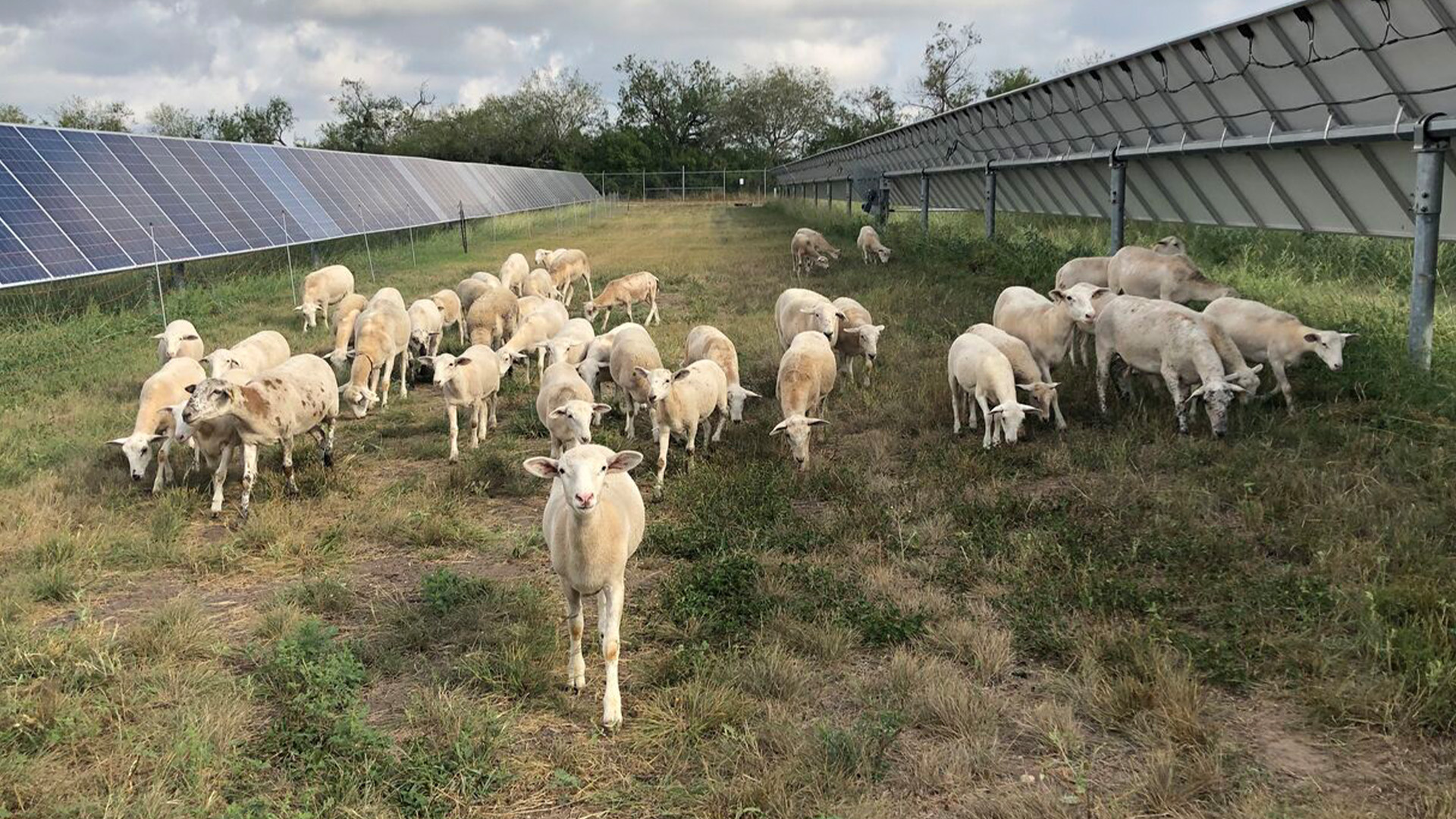 Agrivoltaics are more than just a buzzword used to boost good feelings about PV solar. Many practical accomplishments intersect with the use of land for both PV power generation and agriculture. There are advantages for solar developers to capitalize on, as well as contribute to healthy ecological practices.

Competition for land is becoming more intense. Pastoral landscapes are ideal for both solar production and plant farming, putting major solar projects in direct competition with plant and animal farmers who have historically owned and managed the land.

Exploring possibilities for allowing the same plot of land to host both PV solar structures and cultivated plant life can lead to positive outcomes, including:

We’ll explore these in this post. We’ll also discuss exactly how solar project developers can use single-axis trackers for this mutually beneficial setup.

The concept of co-developing land for both PV solar production and food crops or other plants dates back to 1981. The first prototype was developed in Japan in 2004 and the term agrivoltaics was likely first published in 2011. A decade later, there are agrivoltaic projects of different scales all around the world.

Rather than using gravel or paving the ground beneath solar arrays, these dual projects have grasses, pollinator plants, or food crops below. PV modules work optimally in a sunny, cool environment. Plant life naturally holds and releases water vapor into the surrounding air, which cools it. This harmonious arrangement means modules perform better and the right plant life can grow better, partially shaded by these technological structures.

Different countries experiment with crop categories and their capacity to thrive beneath solar arrays. Not all plants do well beneath the modules, but some species actually thrive in partial shade, and others can be planted beneath strategically spaced solar trackers.

At sites throughout the U.S., lettuce and other leafy greens, peppers, peas, and many other crops are being grown. One study showed even typically shade-intolerant corn grows well beneath PV solar trackers and modules. In France, experiments growing agrivoltaic vineyard grapes not only proved successful, but required less watering, as the grapes were able to hold onto moisture in the shade. Japanese agrivoltaic fields grow shade-hungry ginseng and coriander.

Projects of various sizes and compositions span across Europe, Asia, the Americas, and Australia. Organizations in China and Australia are even using agrivoltaic practices to counteract drought and desertification.

How Agrivoltaics Work Out All Around

Rather than threaten a farmer’s livelihood, PV solar generation can offer additional income to farmers who lease their land and/or sell the energy produced. This can smooth out fluctuations in income due to weather unpredictability, to which farmers are typically subjected.

One study modeled an economic value boost of 30% for farmlands utilizing agrivoltaic crops over conventional crops. Another showed it could increase land use efficiency by 60 to 70%.

The shade provided by solar modules can actually establish a new microclimate that supports and sustains the local ecosystem through pollination and water retention.

Grasses, wildflowers, and other crops that don’t produce food directly offer a haven for pollinators such as butterflies, honeybees, and birds. Pollinators are responsible for an estimated 35% of the world’s food supply and are in danger of decline or extinction as habitats become scarcer, among other challenges.

Shading from solar modules supports water retention in soil and reduces water usage through less need for irrigation. A study by NREL showed water efficiency increases of over 150% and even double or triple fruit production through agrivoltaic practices.

How Trackers and Solar Developers Play a Role

Single-axis solar tracking systems can not only optimize the amount of sunlight modules absorb throughout the day, but their movement can also allow more sunlight through to the plants below (compared to fixed-tilt systems). They can also shield crops during hailstorms.

Of course, not every site can host an agricultural Garden of Eden beneath its panels, but doing so, when possible, can help offset the (already comparatively minimal) ecological impact of solar PV sites where cement or gravel are used.

Solar developers and investors can select “brownfields,” vacant or abandoned developed plots of land, for projects. Not only does this support ecosystems in previously dry, lifeless places, it can also stimulate the local job economy through employing local workers.

The architecture of DuraTrackⓇ Hz3 makes it a more friendly option to the plant life below with a minimal amount of shading and a flexible ground coverage ratio. In addition to this, SmarTrackTM eliminates backtracking and thus reduces shadowing against modules. This makes it a good option for projects to use a wider variety of plant species while also ensuring that energy production is still consistently optimized.

DuraTrack’s highly adaptable frame makes it ideal across different types of terrain. Depending on the configuration of the land hosting the structure, it can also be installed at different heights, which plays a role in how much light hits the ground as well.

RP Construction Services Inc. (RPCS) recently installed DuraTrack trackers in the first dual-use project in Monson, Massachusetts. The site, called Million Little Sunbeams, was designed with 20-foot row spacing at a height of 10 feet to allow sunlight to reach the crops below and for tractor access.

Combining both smart engineering and smart ecological practices can further align the technology used to create cleaner forms of energy with agriculture. From a practical standpoint, it helps chip away at some of the world’s biggest problems and mitigates the competitive trajectory of solar farm vs. food farm.

From a philosophical perspective, these solutions fuel life in more than one way, supporting major systems involved in producing both the food we need for life and the energy we need to live it, coexisting beautifully.  For a more in-depth look at the possibilities of agrivoltaics and Array’s part in them, download this white paper: Solar Power + Agriculture: The Practices and Synergies of Agrivoltaics from our partner RPCS. 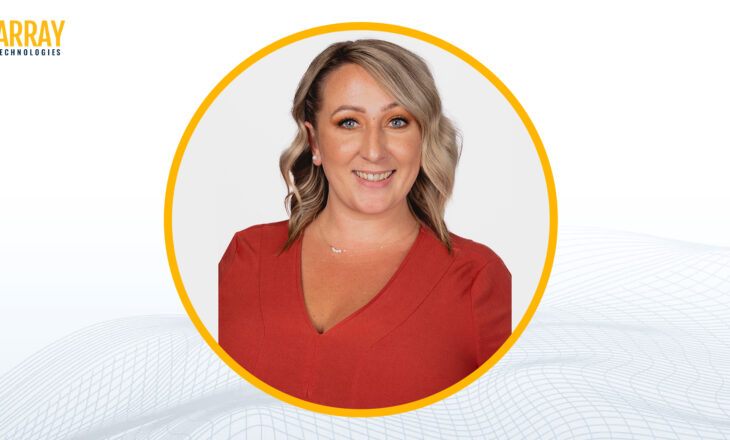 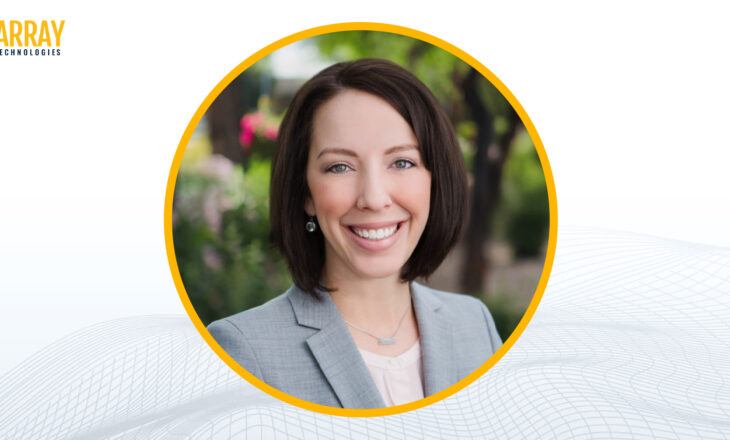 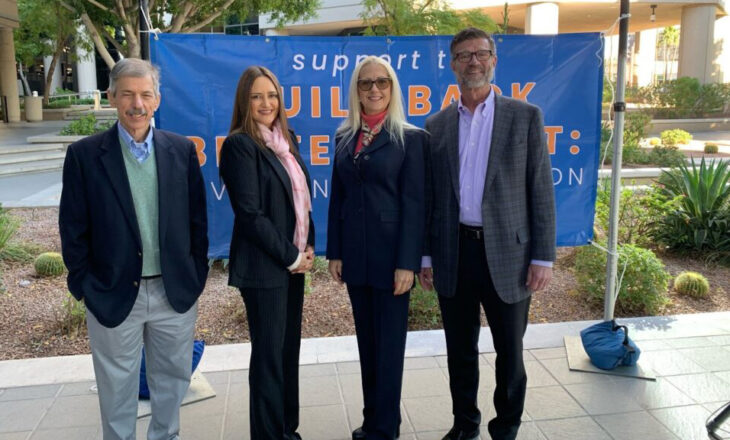